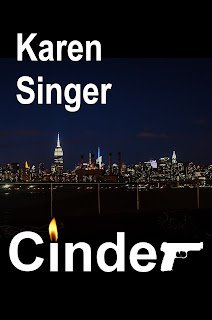 Yes, here it is – finally!  Cinder.  My fifth book to be publish as an Amazon EBook.  And possibly my best.  Well, I guess that’s for the individual readers to decide.  But I certainly like it – enough that I find it one of the most engrossing books I’ve ever read.  For me, this one is truly hard to put down.  In fact, every time I read through it to find problems, I got rather irked each time I had to stop.

So what’s it about?  Here’s my book description:

For as long as he could remember, his father had always threatened him with the phrase, “I’ll burn you to a cinder, and then step on you and crush you out!”  And then one day when he was fourteen, his father tried to do just that.  He ran from the house in absolute agony, and he never went back.  Living on the streets of New York City, he learned to survive on his own.  Until two years later, six people were murdered right in front of him, two of them hookers that were his best friends.  And his life changed forever.

This book is full of action, suspense, and mystery – all wrapped around the smartest…and dumbest kid you’ve ever met.  This is a story about a kid who loves New York and loves his freedom to literally walk the entire island of Manhattan at will.  But he is a kid plagued with problems.  Problems that only grow worse as the story progresses.  Problems from too many people who suddenly want him dead.  And all that is on top of another little problem.  He was born with a birth defect.  He was a girl…with the wrong body.

I consider the main character in this book to be the second most interesting character I’ve ever created.  The first most interesting one was in a book I published as my real self – one that I have started the process to take back from the publisher that is now out of business and I will be republishing it as an Amazon Kindle EBook as well – hopefully soon.  And I will publish it at a price that I think is fair!

Sorry, back to Cinder.  Like all my books, this one is very different from everything I’ve ever written so far.  In fact, the only thing all my Karen Singer books have in common, is that of transgender.  But with this book, I’m hoping that the story is good enough that even people who don’t care about the transgender issues will also find it a great book.  I can only hope anyway.

So I would like to highly recommend this book for you to read – and get lost in.  But then I’m the author, and I recommend all my books for your reading pleasure.  So please check it out and hopefully buy a copy.  For me…please!
Posted by Karen Singer at 5:48 AM 1 comment:

Steve woke up the next morning to find a message on his computer.  Before he really read it, he looked at it carefully.  The message was simple text typed in his Notepad program.  There was no clue as to who had written it or how it had gotten there.  But once he read it, Steve knew that somehow the witch had put the message magically straight onto his computer.  He read the note carefully.

As you know by now, you cannot even touch a piece of male clothing until I allow it again.  You also know that you can’t fight me – I’m far too strong.

If you do everything I want, then I MIGHT let you wear pants on your flight home again next Saturday.  If not, then I have lots of ways to make what you’re experiencing now even worse.  Far worse!  The more you defy me and try to fight me, the worse things are going to be for you.  But if you cooperate completely, then you’ll be able to wear pants to travel home again.  The choice is yours!

So here’s what I want you to do.  For the rest of the week, I want you to go out of your way to humiliate yourself.  You must dress as a girl all the time – dresses and skirts only – no pants of any kind are allowed!  You will act as absolutely feminine as possible all the time.  You cannot hide in your room, you must go out and show yourself to people.

Every single day, you must also to spend time on the beach in your bikini too.

It’s as easy as that.  That’s all I want.  Do as you’re told, and you’ll be able to buy pants again for Saturday.  But the more you defy me, the worse your situation will get.

Steve couldn’t believe it!  He shuddered as he read through it a second time.  The note even sounded like it was written by a witch.  What more proof did he need?
As he read it a third time, there were some thoughts that seemed to burn themselves into his mind.  He must humiliate himself constantly.  He must show himself to people…all day, every day.  He must shop and buy lots of feminine things.  And he must expose himself on the beach in his bikini.  In other words, every day for the rest of the week should be pretty much like the day he had yesterday – without a doubt, the worst day of his life!
He saved the note to his computer so he could study it later.  It was proof that the witch was after him.  Then he sat on the bed and tried to figure out what to do.  There was no fighting the witch.  He knew that now.  He was nothing more than a puppet that had to do her bidding.  So for now, he had no choice, he would have to play her game – but all the while, he would cautiously search for a way out.
The witch hadn’t said anything about when he had to do everything, so he opted to go to the beach first that day.  As he laid out soaking up the sun, he put his straw bag under his head to use as a pillow.  The result was that it was now easier for him to watch everybody else around him having fun.  There were two really beautiful girls that morning that particularly caught his eye.  He watched them playing in the water.  He watched them tanning on the beach.  He watched them pointing at him and laughing.  Under different circumstances he would have made some moves on one of them – or maybe even both of them.  But he couldn’t do that now.
Before he left the beach, he decided to brave going into the water, just to see what it felt like.  He had never been in an ocean that looked like this before.  Ignoring everybody around him, he bravely walked down to the edge and let the tiny waves roll over his feet.  He was surprised at how warm the water was.  Almost like a bath.  He walked in a little farther.  The water was crystal clear.  He saw movement in the water and was momentarily startled.  He looked again.  There was a school of fish swimming all around him.  Amazing!  He stared around himself through the water more carefully.  There were more fish.  Beautiful fish.  It was incredible!
But then he felt the presence of someone else coming into the water.  He looked up to see one of the two girls he had been watching earlier wading directly toward him.  “They’re beautiful, aren’t they?” she noted as she waded up to him.
Steve was confounded that anyone, especially a pretty girl, would even want to talk to him in his present condition.  He desperately wanted to cover himself up, he wanted to hide somewhere, but there was nowhere to go.  “It’s incredible,” he admitted, feeling more self-conscious than ever with her next to him.  “I’ve never seen anything like it.”  He went back to staring at the fish in the water so he wouldn’t have to look her in the eyes.
“Can I ask you a question?” the girl asked.
Steve still wondered why she should want to talk to him.   “I guess so,” he replied, still looking at the fish.
“Why do you do it?”
“Huh?”
“Why do you dress like a girl all the time?  I’ve seen you here on the beach before and I’ve seen you shopping in town too.”
“I don’t want to do it,” he explained.
“Then…”
“I have to do it.  I’m being forced to do it.”
The girl looked surprised.  “You mean someone’s making you do it?” She looked around at the people on the beach.  “Is it someone here?”
Before Steve could reply, the second girl entered the water and joined them.  Again, Steve felt embarrassed to be standing next to them, dressed the way he was.
“He says that someone’s making him do it,” the first girl explained to the second one.
The second girl looked around at the beach too.  “Who?”
Steve sighed.  They’d never understand.  “She’s not here,” he explained.  “She’s far away.”
Both girls looked at him like he was crazy.  “Then why do you still do it?” the second girl asked.
“If she’s not here, then how would she know?” the first girl added.
Steve just blurted it out with more than a hint of anger.  “Because she’s a witch!  A damn magical, for real – witch!  Somehow she can see everything I do and she knows everything I’m trying to do!  She’s got some kind of magic and it’s damn powerful.  And if I don’t do what she wants then she forces me to do it anyway!”
It was a few seconds before either of the girls answered.  “You’re nuts, you know that?” the first girl said.
“Yeah, so what,” Steve replied as he went back to searching the water for more fish.  He knew they wouldn’t believe him.  Why couldn’t they just go away?
“I think it’s just because you want to do it and you don’t want to admit it,” the second girl said.
“Think what you want,” Steve replied sullenly.
Nobody said anything for a while.  Steve just wished they’d go away and leave him to his miseries.
“So,” the first girl finally said, “are you going shopping later?”
“I have to,” Steve replied without looking up.
“Well then, maybe we’ll see you later,” the girl answered.
Steve watched the two pretty girls playfully leaving the water.  They looked so happy.  If only…  If only….

Posted by Karen Singer at 2:55 AM No comments: