For those of you who are waiting for the release of my next book, I just want you to know that it's not quite ready yet.  I'm still doing one final last edit on it to find those nasty things that need fixing.  I hope to have it available in the next week or two.  Sorry for the delay,

Karen
Posted by Karen Singer at 2:08 AM No comments: 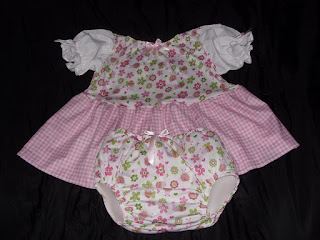 Ashley was outright laughing at me now.  I know my face was blushing.  I also know that damn chastity device was doing its shrinking trick again.  Joanna had dressed us both in the most babyish looking outfits imaginable.  But of course, Joanna wasn’t done yet.  Not by a long shot.
“Sit on the bed, babies,” Joanna told us.  While we did that, she went to that magical suitcase of hers again, this time bringing back…socks.  Two pairs.  Both of them white with pink lacy tops.  As always, Ashley first, then me.  And of course afterwards, Joanna went back to her suitcase again.  What now?
Should I have been surprised when she brought back two pairs of shoes?  No.  Not at all.  But I was totally shocked to see those shoes.  The groaning of disbelief that came from Ashley at the sight of them pretty much echoed my disbelief as well.  Talk about a sissy looking pair of shoes!  They were black patent leather little girl Mary Janes.  But…they had a big, and I mean big, pink bow on the toes.  As always, Joanna buckled the shoes onto Ashley first, then a bigger pair on my feet.
I could only stare in disbelief at those shoes as Joanna went back to the suitcase and came back with something too small for me to see what it was.  I quickly found out though as I saw her working on Ashley’s shoes…or rather the buckle of those shoes as she stuck a small lock through the stem of the buckle, making them impossible for Ashley to remove.  A minute later, mine were locked to my feet as well.  Another locking pair of shoes…and these weren’t even heels.  But I can tell you this, with that big pink bow that couldn’t be overlooked, they were actually far more embarrassing than any pair of shoes I had ever worn…or could ever conceive of wearing.  And since they were locked on, I couldn’t take the darn things off! 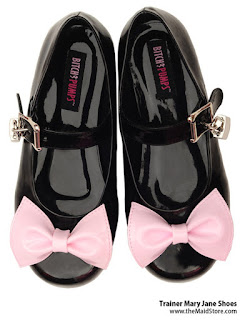