I can’t begin to tell you how happy I was to get to work Monday morning – and away from my fateful home life.  I had no doubt that Joanna was going to call me Monday morning, and when she did I fully expected two things from her:  one, to apologize for Ashley beating me so hard the night before; and secondly, to finally tell me what she had decided about my punishment for wimping out on Saturday.  I was wrong on one count, and mostly wrong about the other.  Yes, she did phone me instead of texting, but she never mentioned the beating I got at all.  Did I dare bring it up to her?  In the end, I chickened out about that too.
As it turned out, the only reason she called, was to let me know that she had decided what she wanted to do about my punishment, but that I would have to wait until after we both got off of work to hear what it was.  She said she’d call later that night to talk to both Ashley and me at the same time about it.  Would she then tell Ashley that she had gone too far hitting me last night?  I could only hope.

“You’re late!  Where the hell have you been?”
Yeah, there’s no doubt at all that Ashley was the kindest person I knew…not!  “I had to stop at the store,” I told her as I set my bag down on the kitchen table and headed for her chair in the living room.
“What for?”
“I needed a new mattress cover for the bed.  And while I was there I got myself a new clock for that bedroom as well.”
She didn’t appear happy.  But just knowing that she was perturbed brightened my day…no matter what consequences that might bring me.  “You should have waited until after you came home.  Then I would have let you go out to get them tonight.”
I didn’t bother mentioning that I purposely didn’t wait that long, only because I was afraid of how she’d make me dress before she let me go out.
“Get changed,” she said angrily.  “You know what you’ve got to wear.”
Yeah, I did know.  I wasn’t happy about any of it, but that was my life now.
“You’re not going to spank me first?”
She glared at me before she spoke.  “If you want me to, I’ll be glad to do it now…and later!  It’s no problem, believe me.”
“No!” I replied quickly.  “Trust me, it’s just fine with me.”
“Then like I said, go get changed!”
I headed off to my new little room, wondering why I was still doing this.  But it was a life I had signed up for.  A life of servitude and total humiliation.  I just wasn’t sure how willingly I had actually signed up for it.  Of course, as much as I hated it, it also turned me on all too much.  But should that count for anything?  Maybe…maybe not.  So how come I was still doing it?
Along with the super thick diaper I’d much rather do without, I opted for my boots instead of the five inch heels that I knew I’d be locked into later.  The change, as bad as it still was, was a welcome one.  On top of my bra with the breast forms, I added my white peasant blouse with the colorful designs on it.  I know it made no sense, but I simply liked wearing that top.  It was not only comfortable, it was…pretty. 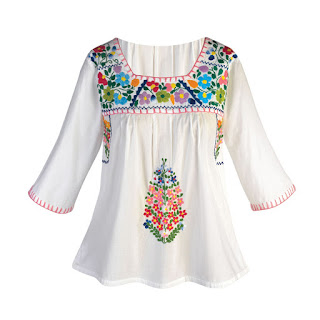 Posted by Karen Singer at 4:17 AM No comments:

Posted by Karen Singer at 2:43 AM No comments: